Atticus's Attic Welcome to the Attic!

A Listener Reviews: The Iron Heel 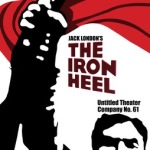 Length: The whole things comes in at about 140 minutes

I’ve listened to… all episodes

Transcripts Available: The story itself is based off the Jack London Novel, but I did not find specific transcripts available

The Premise: The Iron Heel is, according to the web “the first modern dystopian novel.” It follows Avis and Earnest, two lovers fighting for worker’s rights against the Iron Heel of the capitalist oligarchy.

My Review: I previously reviewed a podcast by this same theater group and loved the approach. In The Resistible Rise of JR Brinkley, the episodes wove together not only the story of the strange JR Brinkley’s rise to fame, but also interviews with experts in various historical fields and adaptations of period music. It was a really wonderful listening experience that was not only enjoyable, but informative. So hearing that there was another show in the same vein, I was incredibly excited.

The Iron Heel continues this style. For me, listening captured the feel of sitting in the theater watching a play. It has the familiar setup and frame as a theater show, and I have missed being able to sit in those seats recently. The acting and writing are styled and paced like a three act play. I found each of the three sections held up well on its own, though the story is understood in completion.

As I mentioned, the production weaves together the actual story alongside interviews with relevant experts. There are also renditions of labor-movement songs. Personally, I found many of the musical adaptations to be clever not only in the wording, but in the tunes used. Throughout this story, there are threads woven together between economics, religion, personhood, and family. It is a theme that touches every part.

The story itself is based off the Jack London novel. It uses a similar frame, a narrator recounting and adapting the found journal of Avis as she describes the fight against capitalism. Her story focuses on her husband, Earnest’s, role in the events. The frame story is set in a socialist utopia, looking back at the often tireless fight that finally succeeded. It takes this dystopia story and adds an element of hope, something I found refreshing. Avis is a really relatable character in many ways, confronting her own prejudices and then serving to hold people true to their stated goals and aims, without giving in to the pressures of the new world.

The way this story is adapted is wonderful. The language retains that more formal, older style. At times it feels a bit stilted because it is not the way we talk, but it serves to keep the past events anchored in their past. There are also a number of clever, fourth-wall-breaking moments. I found these served to help break down the romantization sometimes seen in such works. It focuses on the brutal, bloody systems in place. Those facts are not hidden behind the language, but up front. The frame story also includes intentional misunderstandings, serving to reinforce how far society has come. Both of these techniques wonderfully create that sense of distance from events.

The selected interviews at the end of each episode are also enlightening. I had cursory exposure to labor movements in the US during school, but nothing too detailed. I will always take an opportunity to be entertained and taught, and the Iron Heel delivers. It demonstrates how art is a part of revolution through focus on writings and music of the time.

Overall, the Iron Heel is a well-produced audiodrama that delivers the feel of an in-person play, but through a podcast format. They use that to their advantage to pack in a number of songs and interviews that deepen the context of the story, while also providing some real world knowledge. The story is based off of Jack London’s work, but adapted to this format to tell a quick paced, character-driven exploration of the fight against the oligarchy. A different approach than many audiodramas, but one that is well worth hearing.

You can find them here: The Iron Heel and support them in making other great entertainment here

If you like what you see and feel so inclined, you can send me a tip on Ko-Fi. Never required, always appreciated.

© Katherine C and atticussattic.wordpress.com, 2013-2021. Unauthorized use and/or duplication of this material without express and written permission from this blog’s author and/or owner is strictly prohibited. Excerpts and links may be used, provided that full and clear credit is given to Katherine C and atticussattic.wordpress.com with appropriate and specific direction to the original content.